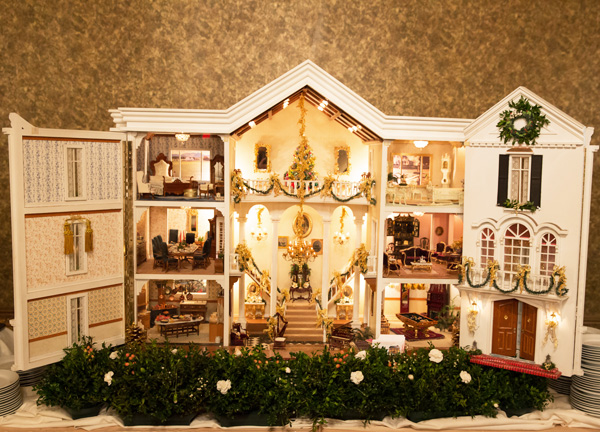 Visitors who took part in the 42 Annual Tour of Historic Private Homes, sponsored by Christmas In Newport, were in for a rare treat as they explored the fine rooms of Tillinghast House this year! Located at 142 Mill Street in the heart of historic Newport, Tillinghast House was the home of John Tillinghast, representative to the Rhode Island General Assembly in 1744 and 1749.  Tillinghast was a wealthy merchant and ship owner and became heavily involved in privateering.

In the winter of 1780-1781, Tillinghast House was occupied by the French Regiment of Engineers and was the headquarters of Continental Army Major General Nathanael Greene during the Revolutionary War (described as George Washington’s “gifted and most capable officer”).  At Tillinghast House Major General Green entertained his notable aides Lithuanian General Thaddeus Kosciuszko and German-born Baron Friedrich von Steuben, Inspector-General of the Continental Army, and of course Lafayette.

Tillinghast House was just one of the nine jewels on display for the 2012 Candlelight Tour and I’m thrilled to report it boasted the same 1:12 scale Gilded Age mansion loaned by Charlene Rich of Miniature Occasions and Dolls, which was the grand display for the *2012 Salve Regina Annual Governor’s Ball (*see previous post, below). Each private home was decorated in traditional Newport style, complete with candles and staffers from Newport’s Regiment Armory dressed in period costume!

After the ball on December 1, 2012, the dollhouse mansion was disassembled and relocated to Tillinghast House. Once there, it was rearranged and placed on display to the delight of scores of visitors who came through on the tour! Each miniature room fascinated both children and adults as they pressed in closer to marvel at the richly furnished rooms, and of course, the delectable 1” scale food.

I’m thrilled to have been part of the ball and the candlelight house tour and wish to thank Charlene Rich for such a fantastic opportunity. Her praise and belief in my art is as unstinting as her friendship. If you find yourself in Newport, do stop in to Miniature Occasions and Dolls! Located directly on Bellevue Avenue, it’s well stocked and definitely worth a visit- and it’s only steps away from The Elms, The Breakers, Marble House, and many other exquisite mansions of the Newport Mansions Preservation Society!

When Charlene asked me to create all the food for the Gilded Age mansion to go on display at the ball, we never dreamed it would be on display in candlelight house tour and we‘re very grateful to Tillinghast House for showcasing our work in such gorgeous surroundings. To learn more about Tillinghast House’s latest venture- Newport Historic Scale Model Homes, friend their new Facebook page by clicking on their name.

Now that these special holiday events have concluded, I will be listing all the food that did not sell, in my eBay (ID: Crown_Jewel_Miniatures) in the coming week. There aren’t many pieces left! 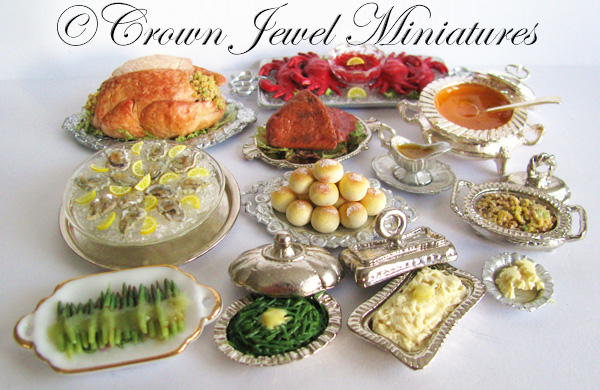 Crown Jewel Miniatures by IGMA Artisan Robin Brady-Boxwell. Fine 1:12 scale dollhouse miniatures in ultimate realism! My blog is a compendium of new art, announcements, and advice on creating miniature food for the dollhouse and 1:12th scale shops, stores and scenes.
View all posts by - IGMA Artisan Robin Brady-Boxwell →
This entry was posted in Announcements, New Miniature Art!. Bookmark the permalink.