I’m thrilled to introduce Chef Ina Coffin©, the 2011 edition of the Crown Jewel Miniatures Annual Halloween series! Chef Ina Coffin© is only the second in the series and she is now available via eBay in all her ghoulish glory! 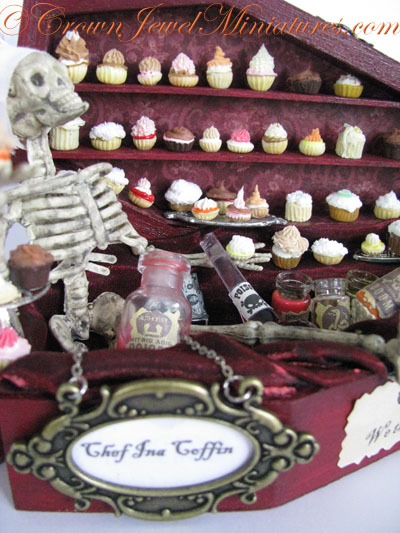 Several factors inspired this OOAK original creation. Halloween is a fun time of year filled with sugary treats and spooky costumes, but I envisioned something really different. I thought a lot about what’s trending and knowing 1:12th scale cupcakes are a hot item these days and I couldn’t resist the combination of a skeletal ghoul selling cupcakes! The more I considered it, the more hilarious it became to have a skeleton who can’t eat, sell cupcakes. The whole idea made me laugh and when I hit upon the idea of poison cupcakes it all came together so fast I had to make notes of all my ideas! Money being the root of all evil is represented in the cash dish. A chef’s hat on a skeleton? A warning label on the back of the coffin where no one can see it? Poison bottles with ghoulish contents displayed alongside pretty cupcakes? I even considered adding a big rat but Chef Ina fits that bill nicely. LOL

Chef Ina Coffin© is a new, slightly edgy concept and I hope folks will recognize the irony lurking behind the humor. The door to imagination has been thrown wide open- literally. Wallpaper in a coffin? Who will see it? What use has a ghoul for money? You hear “think outside the box” everywhere, but what if someone actually popped out of a box, or in this case a coffin, and really surprised your mini dolly with a dastardly trick as well as a treat? Here we have a skeleton who can’t eat or gain an ounce of flesh (lucky devil) who is selling cupcakes- of all things! They look pretty and they’re tasty and the coffin is nicely decorated, so why not try one, right? It’s dark outside and all Dolly can see at first is Chef Ina’s lovely baker hat, so she moves a little closer…

Yummy, delicious cupcakes are everywhere and soon she’s too busy admiring all the wonderful cakes and choosing a flavor to notice anything else. Chef Ina disguises her raspy voice and encourages Dolly to try the double chocolate or maybe the citrus with orange and lemon? She asks Dolly what her favorite is and Dolly tosses her a dollar and sinks her teeth into the best cupcake she’s ever had her doll-size lips around and in minutes it’s all over- mini dolly is lying face down in the 12th scale graveyard as stiff as a board- but wait!

Dolly is resin and this is all make believe! Dolly CPR is easy- just pick her up and sit her on a comfy chair in your dollhouse dining room where she can laugh over silly Halloween ghost stories and get back to collecting Crown Jewel Miniatures’ miraculously realistic food! What could be easier?

Chef Ina Coffin© is a fun, whimsical concept for Halloween and I hope it gives as much pleasure as I had in making it. <3

Crown Jewel Miniatures by IGMA Artisan Robin Brady-Boxwell. Fine 1:12 scale dollhouse miniatures in ultimate realism! My blog is a compendium of new art, announcements, and advice on creating miniature food for the dollhouse and 1:12th scale shops, stores and scenes.
View all posts by - IGMA Artisan Robin Brady-Boxwell →
This entry was posted in Announcements, New Miniature Art!. Bookmark the permalink.